The Folklore of Slow Dakota

It’s a question whose answer fuels the creative work of Slow Dakota, the masterwork of artist Paul Sauerteig. Slow Dakota is a dense musical experience that feels intimately personal while still connected to something much larger and not wholly your own, like the interwoven narratives and tall tales that create our family history. The music is a deeply layered expression of grandiose musicality, a reimagining of Sufjan Stevens’ avant-garde pop sensibilities into baroque explorations of sound and time that provide listeners with moments of inspiration, reflection and magic.

Fittingly, the Slow Dakota moniker is rooted in Saurteig’s own family folklore. His great grandfather wrote letters to President Abraham Lincoln as his mental health decayed and he spent time in and out of mental institutions towards the end of his life. He’d sign all of his presidential correspondence with “Yours, Slow Dakota.”

“Family stories lend themselves to magical realism. Those stories do take on a sort of mysticism and a sort of magic. Certain characters in a family history become larger than life in a lot of ways. The fish gets bigger when you go through the story. My grandpa who I never met is someone like that, who feels like a mythological figure to me. I never met him and I only know him through the stories,” said Saurteig.

Slow Dakota’s new album Tornado Mass for Voice and Synthesizer is a chance to immerse yourself into Saurteig’s bizarre world of personal folklore. As the iconic book 100 Years of Solitude traced the multi-generational history of the Buendía family in mythological terms, Tornado Mass uses symbolic overtures and fantastical soundscapes to tie together characters and narratives of past Slow Dakota albums as they grapple with the destruction of their fictitious town by a tornado. Surreal and engrossing, it is a record not fit for singles, with the songs feeling inextricably linked to one another as part of a grander story. Tornado Mass for Voice and Synthesizer is an album whose virtuosity and scope matches that of its creator.

It’s hard to discern where Paul Saurteig’s history ends and Slow Dakota’s folklore begins. You might be able to read between the lines to get closer to the truth of the matter, but if you read too close, you’ll soon miss the magic in the story.

*Interview with Slow Dakota below 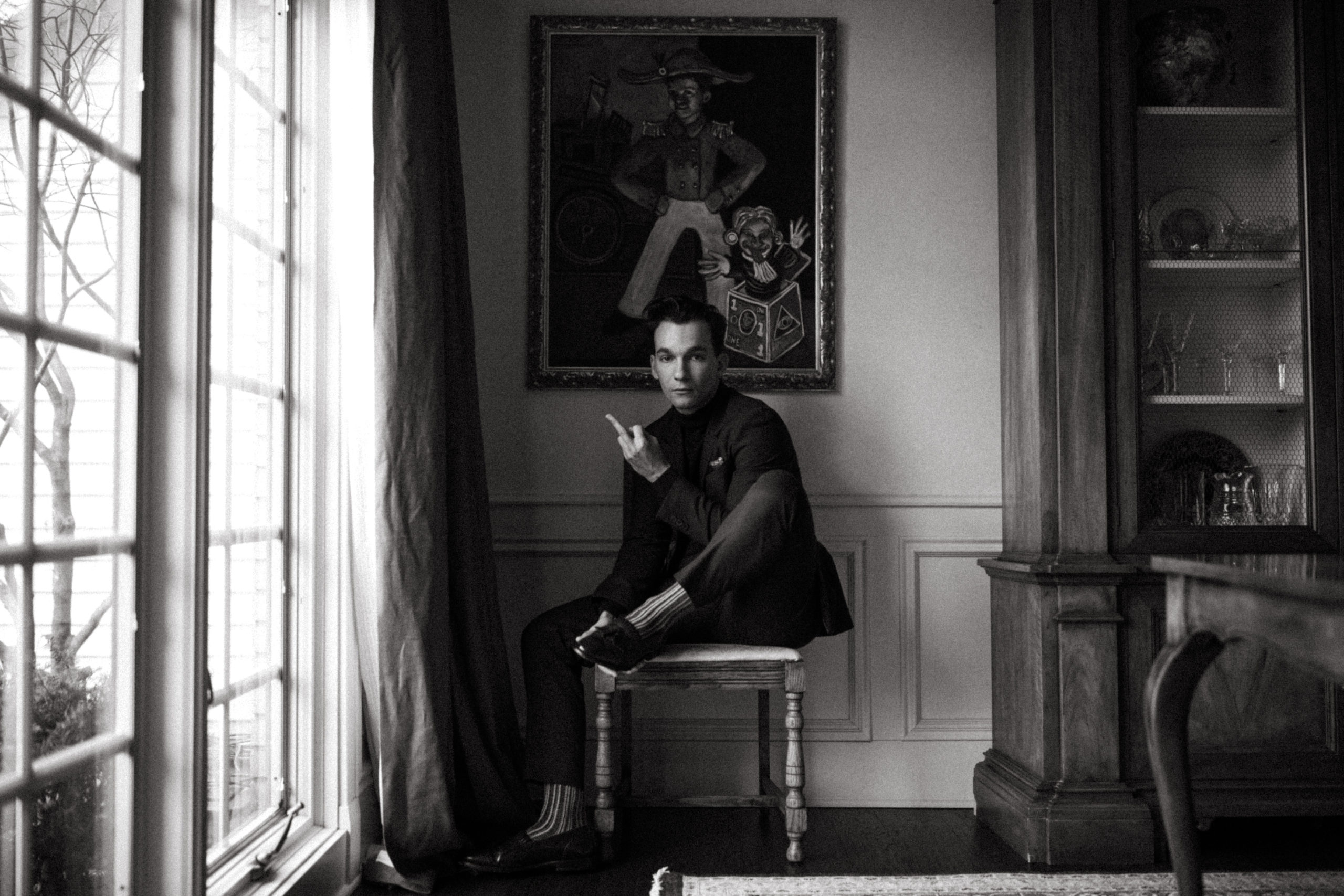 This interview has been condensed for length and clarity

What’s some of your favorite folklore?

I love fairytales and I have a big book in my apartment of all these different fairy tales and myths from all over the world. One of the things that is most interesting to me is that folklore and mythology was an oral tradition for such a long time and I find family lore to be really interesting. Everyone has stories about their family and, if asked, could spend an afternoon reciting tales. Nobody ever writes those down and family history is one of the last corners of this oral tradition of folklore. I’ve built that into a lot of albums that I write, especially Tornado, family history and stories of families interacting.

Old Testament stories still kick my ass and blow me away and there are moments of that in the record too. “Coming to the Nuisance” is about a guy trying to build up for this big storm and no one is getting it and he’s preparing for something he sees and no one else sees. That’s Noah and Noah’s Ark, and think about how lonely that must have been. There’s a little bit of ominous feeling about global warming and climate change where you have certain people feeling that loneliness of Noah, where you see so clearly that you have to batten down the hatches and prepare for the worst and other people are like, “what are you worrying about?”

There’s the Genesis, the creation of the world in seven days. In “Credo,” near the end of the album, there’s the idea that after the tornado, everything is rebuilt in seven days. It was a reference to the idea of a new creation of the world, but instead of a cosmic level, a really local, community level, where only 100 people are seeing it. Rewiring that stuff is always a joy to me.

Where do you see the magical realism in life?

“Burial” is funny to me. It’s in one of these places, especially in 2020, where everyone wants to feel maximum rationality, like they’ve shrugged off a lot of superstitions. If you really think about it, if you were trying to explain burial to an alien, it makes no fucking sense why we do the things we do. We’re gonna take this body and pump it full of chemicals because even though it’s dead, we want to walk by it and everyone has to wear black and you put it in a very expensive box and we all watch it get lowered in the ground. Nothing weird there. Magical thinking is so much more there in our lives than we realize.

I don’t think it’s a bad thing, I’m not making fun of it, I’m trying to celebrate it. There is nothing wrong with holding onto superstitions and ceremony if they are constructive and mean something to you and they bring you closer to people.

Cooking is really beautiful to me, in a group setting with family and loved ones, in the summer time with herbs and shit you’ve grown yourself. My girlfriend is a yoga instructor and helped me see this. People show up to a yoga class and say, “fuck all faith and spirituality and religion and I never would want to be a part of it,” while they chant in a different language and go through these beautiful ceremonies. That seems inconsistent and that’s a great example of magic and leaning into ceremony when it puts you in touch with the special things in life.

At what point did Slow Dakota transition from a family story to your musical pen name? What do you want that name to say about you or the music?

I was in a band in college and was inspired by a lot of bands like Vampire Weekend and Chromeo and Dirty Projectors. Ultimately, I was writing music that felt much more personal. Nothing against the band, but this was something I had to do by myself, knowing it was a little more niche. It doesn’t lend itself to a huge audience like a fun live band would be. It felt private in a way, though I understand I am putting it out publicly. It was the idea of letters to nobody, that I was putting it out with the full understanding it wasn’t going to connect with a significant number of people. The people that do connect almost feel like family, they’ve looked into these weirder parts of you and connected with that and how miraculous that is.

What is your folklore? What’s the folk story about yourself you are trying to tell via Slow Dakota?

In the spoken word section, “Credo” brings together characters from different albums I’ve written. On albums you are telling a folk story about a certain group of characters and the next album you are talking about different ones and this brings together all the characters to help rebuild the town after the tornado strikes, which is kind of like bringing all the folklore into one.

I think it’s changed over the course of several albums. In the beginning I think those folklores were heavily informed by guilt and there was something therapeutic about writing them. Clearly  I was feeling crushed by responsibility and expectations and not having lived up to them. I was telling stories about characters who had failed or who were defined by what they didn’t do.

That’s different in that the more recent ones feel much more hopeful. Not that all the characters feel redemptive or heroic, but the context in which they are presented is one of hope and speaking solace into my life. My life of someone who goes to work everyday, where it feels very bereft of magic, feels bereft of mysticism. I think Tornado is keeping on a certain pair of glasses that allows you to try very earnestly to see the magic, though you are looking at very ordinary things in people. I need that.