The Rebirth of Matt Lovell

What would you do if you cheated death and was given a new lease on life? If you are Nashville musician Matt Lovell, you rise from the trauma like a phoenix and release the debut album you’ve always wanted.

Lovell had spent the better part of 10 years in Nashville waitering at restaurants, quietly writing a growing collection of personal songs and playing small cafe gigs around the city. After summoning up the courage, conviction and dough, he had finally recorded the songs that would make up a debut album by December 2016. A couple weeks later Lovell was shot during a car-jacking and left for dead, a whole person’s life and art almost vanishing that January 2017 night.

Thankfully he survived with the help of an EMT-trained club bouncer nearby, though he spent the next couple years dealing with the emotional turbulence of his trauma, both the highs and lows. The musician came out on the other side with a renewed desire to tell his life’s story, which is captured in the songs that make up Lovell’s  debut album Nobody Cries Today, out next Friday, June 5th.

Songwriting has always been a very personal endeavor for Lovell and the songs on his debut reflect that emotional vulnerability. The album is rich in the acoustic tones of gospel, blues and soul, music perfectly suited to rejoice in the exultations and comfort the damnations that Lovell expresses about love, self-doubt and resilience. His soft mahogany voice is quite stunning and can have you welling up and holding back tears, both in beauty and in pain, usually at the same time. It should honestly happen more often in life for people, but Lovell’s music will make you want to shed your skin of doubting and loathing and feel like your true self, even if you do have to reveal some of your most vulnerable parts.

With a second chance in life, Lovell is being as open as he can about who he is and what he’s about and his music is a beautiful flower to listen to bloom. Please read below for Going Left Music’s interview with Matt Lovell as we discuss his writing process, the honeymoon-period after his attack and how he came out the other side of it all.

*Interview with Matt Lovell below 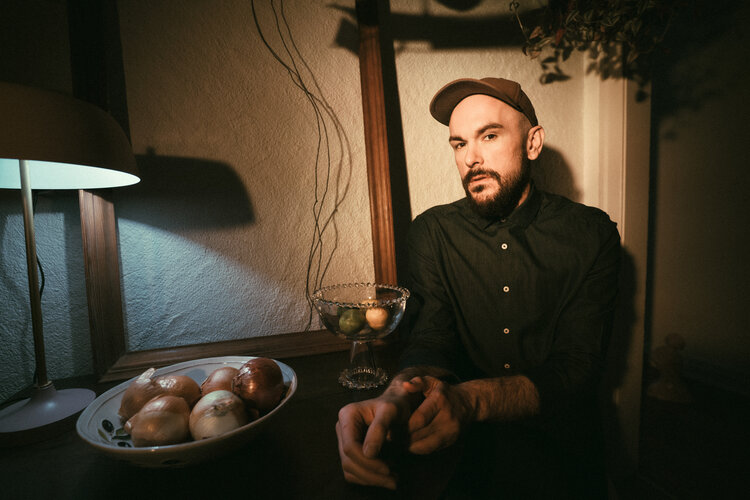 When you are writing a song, do you have any rules that help you get the most out of yourself creatively?

It changes with every season of my life. It all happens at once, it all kind of flows but it changes every time. I wrote “90 Proof” on a restaurant shift. Every time I had a couple glasses of wine, which I was drinking a lot of at the time I wrote it (laughs), I had this ex I couldn’t stop texting when I was in that space. One afternoon I was working at a restaurant and it just came out of me, I had to keep running to the bathroom to record the parts on my iPhone.

Every song is a little different and I’ll find one thing that is working and write several that way, then that will dry up, and I’ll write a couple more songs in another way.

Your melodies are so good and pull you close to your heart. Who are the people you look up to in terms of writing strong melodies and hooks?

My musical hero is Bonnie Raitt. My dad is a classical guitarist and he was playing guitar all around me while I was a kid and my mom came from a family who toured around singing southern gospel. Our nightly ritual was singing three-part harmony. I don’t remember learning to sing, I just remember always singing. The mathematics of singing harmony informed how I structure harmonies. I don’t read music and I just started doing things by ear.

One of my favorite authors is Ann Lamott, she has a book on writing called “Bird by Bird” about writing. I’ll misquote it but she has something in there about one of the best things you can do as a writer is just pay attention and make notes of what you are seeing. You never know subconsciously how you are going to transfer this into your work.

You’ve been sitting on these songs for five or six years and as you explained in your promo for this album, “these songs have helped me explore things like a zest for life, discontent, hunger, truth and hope.” In what ways do these songs explore those sentiments for you?

I played a lot of little cafe gigs in my early and mid 20’s and when I was about 25 in 2012, I started to really practice more as a writer and be more dedicated to doing it. Around that time was the first time I co-wrote with people too and I moved down to Florida with my friend Mandy and we wrote around 50 songs with this guy Tim Jackson. It was a real sunny period of my life. Every morning I’d go walking on the beach around seven in the morning, come back and make some coffee and start writing. Usually by lunch time we’d had finished a song and recorded a quick work tape. It was a simple time of life and I felt very free and untethered, while also grounded. That’s when we wrote songs like “Alligator Lily” and ‘The Gospel.”

When I moved back to Nashville I got a little sad for a few years. I was waiting tables and trying to find a path for myself artistically and had a relationship that didn’t work out. That’s where “Trouble” and “90 Proof” come from. These songs come from a such large span of my life and they got to see me in a lot of different places and I was able to put all these things into the record. It kind of saw me from 25 to 35 and then I got shot.

You’ve mentioned you had a honeymoon-like period after your attack. What was that experience like?

I thought it was a rebirth. It completely knocked away self-doubt and self-loathing. It made me feel really at home on Earth because there was such a wave of love. I remember I told my friends that I didn’t want them to have to deal with the violent part of almost losing your life but I wish you could experience the good parts. You don’t realize how loved you are. There was a benefit concert for me about three weeks after the shooting and it felt like attending your funeral but getting to live through it.

In therapy I learned that after an acute trauma, your body kicks out a lot of adrenaline and endorphins and those effects can last for days, weeks, months, even years. I’m kind of piecing things together, but the more serious the trauma, the longer that honeymoon period can last. I talked to a 9/11 survivor whose trauma didn’t show up for years. Mine was about six months and my reaction was overnight, I was within the E.R.. in 48 hours. My body was so tense, I didn’t know what to do. It was a honeymoon and the honeymoon ended (laughs).

How did you relate to these songs after you had dealt with your trauma after the shooting?

It felt like part of the records I felt nostalgic about because it was clear I was not the same person I had been, though I was glad I had been that person. Somes songs like “Nobody Cries Today” or “Be Free” felt like declaration songs, about how I wish it could be in the world and how I wish I could be in the world. Those songs still resonated with me but in a new light and I felt less hindered in being able to live that kind of life with less baggage.

I didn’t write anything for that year and half during my trauma time, I could barely hold a conversation. I started getting the ducks in a row for the release of this record and started writing again at the same time and I wrote a lot. I felt this urgency to get “Nobody Cries Today” released because I really wanted to live in the present artistically. I want to get it out so I can tell that story so I can start to talk about what’s going on now. It’s kind of like let’s build the monument so we can move on to the next thing (laughs).